€2.49
In stock
SKU
SB080
Add to Wish List Add to Compare
Skip to the end of the images gallery 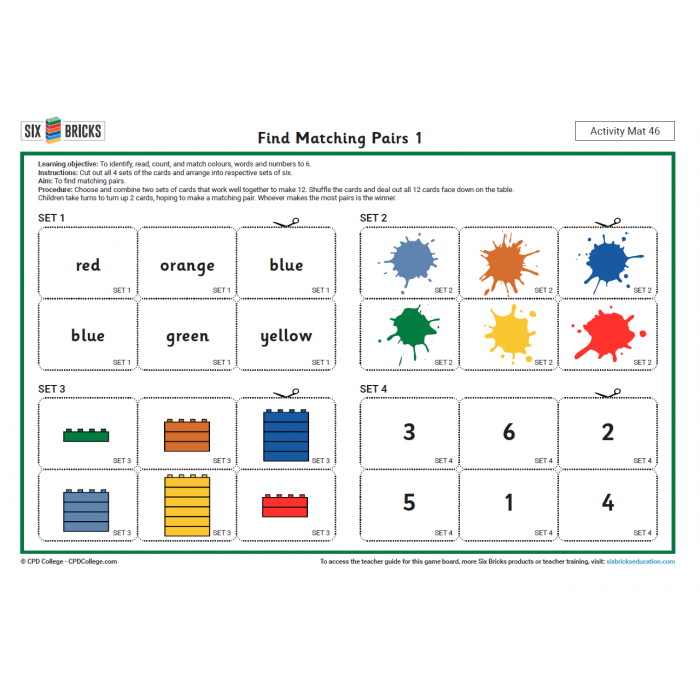 Skip to the beginning of the images gallery
Details

There are 16 fun games for the children to play together once you cut out the cards and create the sets.

On each mat there are 24 cards, divided into 4 sets with six cards in each set.

Each set of 6 cards is clearly labelled in the bottom right corner to help teachers and students to quickly sort them into their respective sets 1 to 8.

These cards are to be cut out by the teacher or classroom assistant along the dotted lines to make packs of 6.

Collect and upcycle a few containers and tubs in which to store the cards.

A set of 48 cards between each pair or three students and you will have a suite of regular skill building activities at your disposal.

Learning objective: To identify, read, count, and match colours, words and numbers from 1 to 6

Instructions: Cut out all sets of cards and arrange into respective sets of six.

Card sets are identified as follows:

Game 4
Combine: Set 4 + Set 5
Objective: to read written numbers 1 to 6 and match to equivalent numerals 1 to 6